Durable Rubber No Squeak Dog Toys by All Kind – Review

After the last toy didn’t work out very well for Maui I thought I’d try a new one for her.  This time I made a point of getting a toy that was a suitable size for a 60 pound Golden retriever!

Toys are always a risky purchase. You think they look fun and entertaining in a store display; a picture; or in a video but when you get that toy home for your dog they just might look at it … and you … like you are crazy for thinking THAT would be fun to play with!

Then again, something you think would never interest your dog (like tiny little cat toys or the little cover of a plastic bottle) grab their interest like it was raw liver! Go figure!

Today Maui and Emma are going to do a review and let you know what they think of the Tug & Fetch No Squeak Tri-Flyer Dog Toy.

Let’s get started and learn about the toy and find out what Maui and Emma think!

If you’re looking for a good-sized toy to toss around and let your dog tug on this might be a good one for you and your dog!

The blue part is made from durable textured rubber. I think the textured surface makes it easier for your dog and you to hold onto. It gives them something to lock their teeth onto without slipping and gives you some texture to hold onto s that's good o your dog just doesn’t pull the toy right out of your hand.

The orange around the edge is made from durable reinforced Oxford piping for extra durability. Maui likes to chew on the edge and after about three weeks of minimal use (she maybe plays with that for a little bit a couple times a week) I see no damage to the orange piping yet.

The tri-Flyer is designed to help you get a good throw when you toss the toy outside.

It also has a decent weight to it. It’s definitely not a flimsy “your dog pokes it’s tooth through it right away” type of toy.

These toys are all similar in that they have NO SQUEAKERS!

This can really be an asset if you use it as an indoor toy and you enjoy quiet playtime with your dog.

On the other hand, having no squeaker could be a big downer for your dog if they are squeaker fans like Maui and Emma.

It all just depends on your dog and if a toy with no squeaker would be intriguing to them or not.

Tug and Fetch No Squeak Toys do not float! An important thing to know if you are thinking about playing with it at the lake!

The Tug & Fetch No Squeak Dog Toys come in other shapes as well:

Each is designed with textured rubber surrounded by reinforced Oxford piping.

The tri-flyer, bone, and bow come in sizes of small and large while the gingerbread man and boomerang appear to only come in one size. At least that’s what it is looking like on Chewy.com right now. Perhaps they are running out of some sizes because they have them all on sale right now.

Love the options here! They come in a variety of really brightly colored toys including:

I really love that these come in such bright colors; it makes them a little easier to find if you are playing with the toy outside and it ends up getting tossed really far or maybe into the grass.

I was excited to get this toy for being part of the Chewy Influencer Program (Chewy provides us with a couple of products in exchange for Maui and Emma’s honest reviews).

I was really hoping it would be a great toy and I could be excited to share with you because the prices on Chewy.com are AWESOME!

Seriously, they are super low for the tug & fetch no squeak toys!

On top of that several of them are buy one get one free!

Not sure how long the sale will last so. Interested you should pop on over and check them out!

Maui and Emma Playing with the Tri-Flyer

Maui and Emma thought very differently about this dog toy.

Emma really had to be coaxed to play with the tri-flyer. Perhaps it was because it is so large to her and it does have a bit of weight to it - possibly. But sometimes I would throw it for her it would be almost like she didn’t even want to acknowledge its existence. The clips in the video are one of the few times we got her to play with it.

Maui, on the other hand, found it to be a fairly fun toy.

Not one of Maui’s all-time favorites (Maui is a big squeaker fan so this did not appeal to her squeak-frenzy mindset) but she enjoyed sitting down with it once in a while over the last three weeks to chew on a bit and toss it around.

She also enjoyed a little fetch with it out in the yard. Keep in mind Maui is not a huge fetcher. Even on an energetic day, she will fetch a toy three or four times and then be done with it. The tri-flyer made it for about three fetches and then Maui was ready to be done.

I consider this toy to be moderately successful for Maui. She has quite a full bin of dog toys and will still pull the tri-flyer out every once in a while to play with it.

What You Should Know

These toys seem fairly durable but were not designed to be a chew toy.

These toys were designed to play fetch and tug.

The manufacturer indicates that these toys are not recommended for aggressive chewers or destroyers. If your dog fits into this description you might want to think about a more chew-centric toy.

And - these toys do not float.

What People Think About the Tug & Fetch No Squeak Toys

Ratings for the Tug and Fetch No Squeak Toys kind of vary depending on the toy.

Looking on Chewy.com at the various shapes and sizes I would estimate that reviews average out to be somewhere around 3.5 out of 5 stars.

The toy shape with the highest reviews and the greatest number of reviews is the small red and green bow -shaped toy (43 reviews giving it an average of 4.1 out of 5 stars). I find this a bit understandable at the shape has ‘handles’ at each and making it really easy for you and your dog to hold onto.

If your dog loves to fetch then some of the Tug & Fetch designs are awesome for that!

If your dog loves to play tug-of-war the bow shaped Tug & Fetch looks like an awesome choice!

Let Maui and Emma know if you have tried one of these toys!

Did your dog love it? Ignore it?

Maui's ears are perked waiting for your comment below! 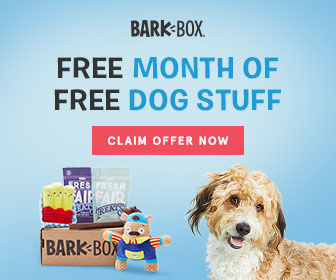 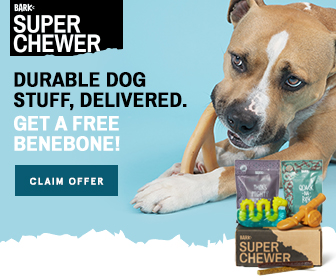